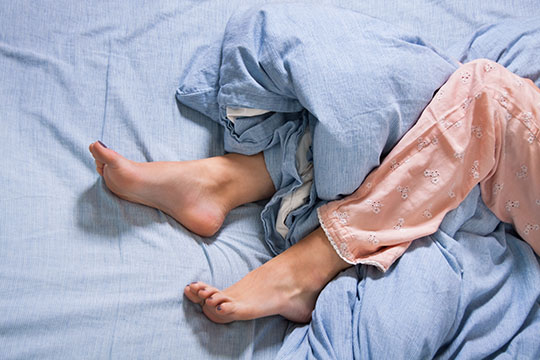 After a long day, there’s nothing better than to crawl into bed, drift off to sleep, and not stir until tomorrow morning. If you have Restless Leg Syndrome however, the scenario is a little different. You’re tired and ready to call it a night. You get comfortable in bed hoping for a good night’s sleep, but just as you’re relaxed enough to drop off, your legs seem to come alive. They twitch and bounce, feel antsy, are uncomfortable, and want to jump. You may feel like sleeping, but your legs have an entirely different idea.

Restless Leg Syndrome (RLS) is a neurological disorder that affects about ten percent of the population. It’s characterized by uncomfortable sensations in your legs with an urge to move them when you’re sitting, lying, or at rest. Symptoms may come and go and are worse at night, also making it a sleep disorder.

Restless Leg Syndrome occurs most frequently in middle aged and older people, and is more common in women than men. It can also affect pregnant women, especially during their third trimester, but in most cases symptoms disappear after delivery.

There is no test for RLS, so a diagnosis is based on presenting symptoms. In addition, there is no known cause of this condition, but doctors suspect that there is a genetic connection. Almost one-half of people who struggle with RLS have a family member who has also had it. What doctors do know is that there are risk factors for RLS, which include having a chronic illness, such as Parkinson’s, diabetes, or peripheral neuropathy. In addition, some health care providers believe that RLS may be related to a deficiency of iron, Vitamin B12, or folate. Medications, such as those to treat nausea, antidepressants, cold and allergy medications, and antihistamines have also come under scrutiny in causing RLS. And in a recent study, researchers documented that when study participant’s varicose veins were treated, 98 percent of them found relief from their RLS symptoms.

In Chinese medicine, Restless Leg Syndrome is associated with poor circulation. The symptoms are worse when you are sitting or lying down, times when your legs aren’t moving and your circulation has slowed. As indicated by the study of patients with varicose veins, when circulation is restored by treating the varicosities, symptoms of RLS subside. Therefore acupuncture and Chinese medicine can offer an effective treatment for RLS, as it enhances circulation not only locally, but throughout your body. In addition, acupuncture is an effective treatment for insomnia. If you choose to treat your RLS, your practitioner of acupuncture and Chinese medicine would likely combine acupuncture with an herbal formula to enhance their treatment, as well as dietary guidelines, bodywork, and some lifestyle tweaks to enhance your sleep.

There are also some things you can try at home if you’re struggling with RLS, including: 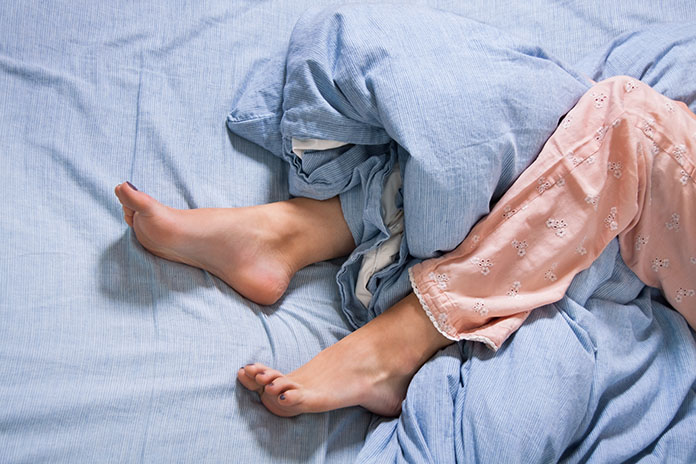