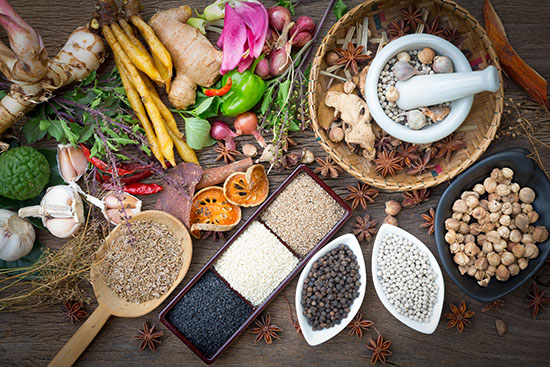 To many people Chinese herbs may feel exotic and mystical and very foreign, for a good reason. In treating serious illnesses and complicated conditions with herbs, you need a practitioner who is well-trained in the properties, actions, and nuances of Chinese herbs; someone who knows how to combine them into effective formulas.

Chinese herbs can be complicated because each herb carries with it specific properties. Herbs have a temperature, which means that some herbs can cool your body down and others can warm you up. They also have one or more actions, which is the effect it has on your body. For example, an herb can drain excess fluid, build up your energy, or help to dry out phlegm. Herbs also affect specific organs; some benefit your Lungs, while others may help your Liver. And herbs, when combined with one another, may have a synergistic effect—they may strengthen, balance, or offset the actions of other herbs. For that reason, and for maximum effectiveness, herbs are almost always combined into formulas.

Despite the complexity of dealing with them, you may be surprised to know that you likely have many Chinese herbs in your kitchen right now. That’s because some of these herbs are also foods and common spices. In fact, Chinese herbs are everywhere. Here are 8 examples and how to use them:

In a Chinese herbal pharmacy, most of these herbs are dried. They’re mixed into various formulas, either whole or powdered.  Combining Chinese herbs into formulas can be complicated and should be left to a licensed practitioner of Chinese medicine.  There’s good news though in that many of these same herbs can be eaten as foods, and are as accessible as your nearest grocery store.

"She has helped me live a full and active life despite my having many allergies and chemical sensitivities. I consider her to be a very ..." Read More
"A year and a half ago, I developed shingles in my right arm and hand. The searing, debilitating pain and weakness continued despite conventional treatment. My Chiropractor suggested that I see Cindy.
After my treatment with acupuncture and herbs, any pain that I still have is minor and the strength in the muscles is now about 90% of what is was before the shingles. Cindy is not only..." Read More
"My experience with Cindy's expertise has been life changing for me. When I began treatment at Eastern Healing Solutions, my health had been declining for several years without improvement from..."
Read More
"My visit to Cindy was to tackle GI disturbances and pain. In my mind, decrease the pain to a manageable level. Pain is a deceptive symptom. You don't realize how it infringes on every aspect of your life..."
Read More

Scroll back to top