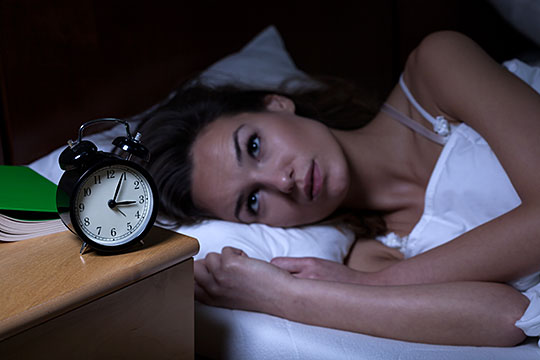 After a long day, there’s nothing better than getting into bed at night and dropping off to sleep. You’re anticipating seven or eight hours of uninterrupted ZZZ’s. Your head hits the pillow – you’re ready for dreamland, and…all of a sudden, you’re wide awake. Your mind won’t quiet. You begin revisiting every conversation you had that day, mentally writing tomorrow’s to do list, and worrying about stuff you may have to do next year. Not only are you not sleeping, but you’re now wide awake and your mind is in overdrive.

Or, maybe you are able to drift right off into peaceful sleep, only to wake four or five hours later. Your mind may be engaged, but more likely you’re just lying there, quietly, waiting for sleep to return. Only now you’re down a quart of drowsiness, so you continue to lie there and wait…and wait…and wait.

If you have a hard time falling asleep and/or staying asleep, you have plenty of company. In fact, almost everyone has occasional periods of insomnia, and millions of people regularly struggle to get a good night’s sleep. Most of those people who go to their Western doctor for some relief from their insomnia leave with a prescription in hand for some kind of sleep medication. In contrast, if you go to a practitioner of acupuncture and Chinese medicine, they will likely spend quite a bit more time with you. That’s because in order to help you sleep better, they first need to have a clear understanding of why you aren’t sleeping. In Chinese medicine, not all insomnia is created equal.

In order to understand how sleep works in Chinese medicine, it’s important to understand the theory behind Yin and Yang, as it plays a big role in activity and sleep. You may have seen the black and white circle that represents Yin and Yang, or you may have heard that they represent the sunny and shady side of a hill. The most important thing to know about Yin and Yang as it relates to sleep is that in your body, Yang acts like an internal flame that keeps you warm, powers activity, and keeps your metabolism humming along. In contrast, Yin is a cooling, rejuvenating, and calming substance that nourishes you and balances the warm activity of Yang.

During the day, Yang is in play, fueling activity, fostering energy, and keeping you alert. However, as day becomes evening and into the night, cooling, quiet Yin takes over helping you calm down and slow down so you can relax into sleep. Night is considered to be the Yin time of the day, in which you rejuvenate and recharge your physical and emotional battery.

In Chinese medicine, insomnia is almost always caused by some kind of imbalance between warm, active Yang and cool, nourishing Yin. For your practitioner of Chinese medicine, the first step to helping you sleep better is to understand what is out of balance—too much Yang, or not enough Yin. (Rarely is too much Yin the problem in treating insomnia). If Yang is overpowering Yin, you won’t sleep because you’re hot and active. For example, you get into bed, but your mind won’t turn off—you’re just too wired to actually slow down and fall asleep. If your Yin is depleted, a more likely scenario is that you are able to fall asleep, but you don’t have enough Yin to keep you there—so you wake up in the wee hours and quietly hope to fall back to sleep.

There are a number of reasons that Yin and Yang can get out of balance, and stress is one of the biggest offenders. The nature of stress is that it affects just about everything in your body, and it has the ability to create tension and generate heat. That heat takes the form of irritability, a racing mind, thirst, feeling warm—and insomnia. Essentially, you have too much hot, active Yang to fall asleep.

Another common cause of a Yin/Yang imbalance is menopause. That’s because most sex hormones are considered to be Yin in nature, and the sudden drop in those hormones during menopause means that the cooling and nourishing function of Yin is depleted and not counterbalancing Yang. The end result is that Yang is overpowering, causing hot flashes, night sweats, and frequent waking during the second half of the night. While Yin and Yang will usually rebalance after menopause, Yin continues to slowly decline in your later years, and can make low-grade insomnia a common problem as you age.

If you’re struggling to get a good night’s sleep, your practitioner of Chinese medicine can help. They will enlist the use of acupuncture, Chinese herbs, dietary guidelines, and lifestyle changes to help you get better sleep. However, a few commonsense guidelines based on the theory of Yin and Yang may help, too. They include: